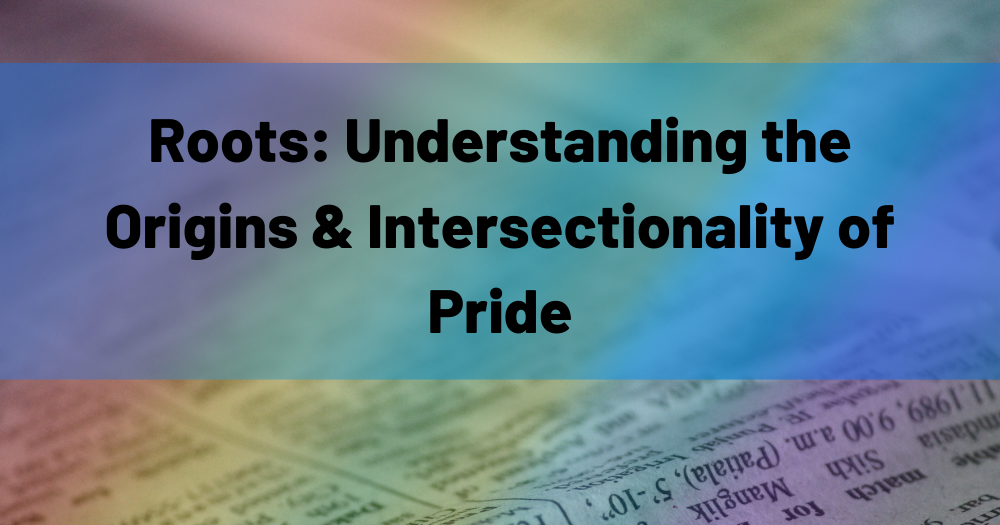 After moving to Salt Lake City last August, I was disappointed that I missed the extravagant pride festivities here in the valley. However, it gave me a moment to reflect on identity, visibility and what it means to have these conversations today. As pride month celebrations come to an end, we have to ask ourselves, “What are the origins of pride?”

The celebration of LGBTQ+ pride is about so much more than the visibility of members of this community. It’s deeply intersected with racism and police brutality. You may have heard of events such as the Stonewall protests, people such as Marsha P. Johnson and the celebrations we have today. But how does it all fit together?

In the 1950’s, LGBTQ+ persons had very few rights. In most places in the United States, it was illegal to cross-dress and dance with people of the same sex, and discrimination on the premise of sexual orientation was completely legal (NY History).

While the world seemed to always be against them, many LGBTQ+ persons found some level of acceptance in New York City but finding ways to financially support themselves proved to be difficult. Some gay men and women could find jobs if they kept their sexual orientation a secret. To make it by, gender-non-conforming individuals often resorted to sex work and homeless, rejected youth relied on petty theft (History.com).

LGBTQ+ people created an active (albeit underground) social life. Gay bars and clubs were commonly run by mafias, who were able to maintain their businesses without licensure by bribing police and local officials (History.com). Although unsafe and illegal, these individuals found an environment where they could finally be themselves.

One of these bars, the “Stonewall Inn,” located in New York’s Greenwich village, was a popular place for LGBTQ+ individuals. Like most Greenwich bars, the Stonewall Inn was owned and operated by the Genovese crime family. With their connections, the bar was able to operate with bribery to local police precincts and officials, in which “corrupt” officers would tip off the bar when unsuspected raids were scheduled to happen (History.com)

One night, the staff were not alerted of a police raid. The raid aggressively arrested upwards of 13 individuals—both staff and patrons (History.com) Tired of the constant discrimination they faced, riots ensued. It was the start to a five-day protest of the treatment of LGBTQ+ individuals.

At the front lines of these riots was Marsha P. Johnson (she/her), a young Black trans women and gay rights activist. Marsha led an impactful life forming and supporting crucial organizations with goals of helping the LGBTQ community in New York and around the country.

Although you may not have learned about her in school, Marsha P. Johnson was an iconic figure in New York City. Personally, I look to her as the source for modern-day practical fashion, conversations about queerness and the celebration of pride. Often wearing beautiful extravagant outfits, she made from thrift stores and scraps, her sense of style embodies what it means to not only dress but exist in a way that makes you—as an authentic individual—comfortable.

Today, “thrift flipping” is a common and welcomed practice. LGBTQ+ folx with little money have been creating masterpieces for decades (NY History). Through her actions, Marsha declares that queer people exist, have value and are resilient. To me, this is what it means to celebrate pride.

Although the Stonewall riots were far from a celebration, it acted as a catalyst for change. The first Pride parade and celebration was on June 28, 1970—one year after the Stonewall riots ensued. Marsha was able to walk in 22 Prides before her death in 1992. While police ruled her death a suicide, her close friends insisted that she was attacked—an issue very common amongst Black trans women then and even today (de Blok, Christel Jm et al.).

A study from Amsterdam University published in September of 2021 showed strong evidence that trans people, especially trans women of color, live significantly shorter lives due to violence and suicide than their cis-gendered counterparts (de Blok, Christel Jm et al.). This begs the question: If trans women of color are the most at risk for suicide and targeted violence, how can we support them?

As you celebrate pride, however that looks to you, keep in mind that it was built on the sacrifice and struggles that LGBTQ+ individuals have faced not only in the past but in the present as well.

Visit the sources that were utilized to write this blog: