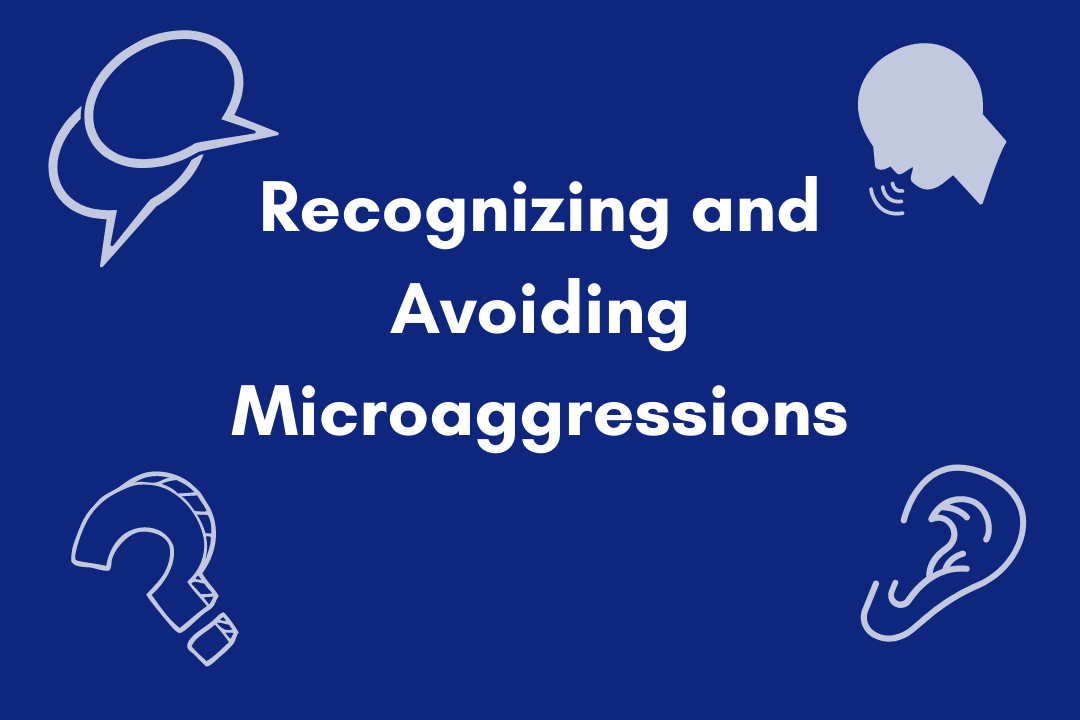 We’ve seen posters around campus with mentions of microaggressions, but what are they actually? What harm do they cause? How do we make sure we avoid them? Merriam-Webster Dictionary defines microaggressions as, “a comment or action that subtly and often unconsciously or unintentionally expresses a prejudiced attitude toward a member of a marginalized group (such as racial minorities).”

In an article from the American Psychological Association, Dr. Derald Sue is cited for his research on what he calls the three types of microaggressions:

Microassaults: Conscious and intentional actions or slurs, such as using racial epithets, displaying swastikas or deliberately serving a white person before a person of color in a restaurant.

Microinsults: Verbal and nonverbal communications that subtly convey rudeness and insensitivity and demean a person's racial heritage or identity. An example is an employee who asks a colleague of color how she got her job, implying she may have landed it through an affirmative action or quota system.

Microinvalidations: Communications that subtly exclude, negate or nullify the thoughts, feelings or experiential reality of a person of color. For instance, white people often ask Asian-Americans where they were born, conveying the message that they are perpetual foreigners in their own land.

The same article also described a study on microaggressions by University of Utah researcher and professor William Smith! The study found that, on elite campuses such as Harvard, Black students would often be reported without cause to security upon entrance to computer labs, and fraternity gatherings would often be reported to police as suspected gang activity. Students reported feelings of alienation, being trapped in stereotypes, and noticed hypervigilance by those around them. Further studies are being conducted to study the effects of microaggressions on other ethnic and racial minorities, religious minorities, people with disabilities, women, and those in the LGBTQ+ community.

A few examples of microaggressions can be:

People often use microaggressions unconsciously, but they can still be harmful. It’s important to listen when microaggressions make a person uncomfortable. We’re human. We make mistakes, and the most important thing is to learn from our mistakes. People who experience microaggressions often feel a burden to educate others on what microaggressions are, and that’s not a burden they should have to carry. It’s incredibly important for people to educate themselves on microaggressions rather than relying on others for that education. One resource is the American Psychological Association, which has an excellent self-education tool for targets, bystanders, and perpetrators. There’s also a TED Talk on the subject that’s available for free on YouTube.

Microaggressions are often unintentionally used, but they still lead to feelings of alienation and anger among minority races, religions, sexualities, abilities, and women. It’s also important to note that a person belonging to one marginalized community can absolutely commit a microaggression against a person belonging to another marginalized community. For example, a white woman can be racist, and a gay man can be sexist. No matter who you are, it’s important to do our best to identify and avoid microaggressions. When we work to support marginalized communities on campus, we become a more inclusive and caring community. Our campus should be a place where all students feel welcome, regardless of their race, religion, sexuality, and other identities.