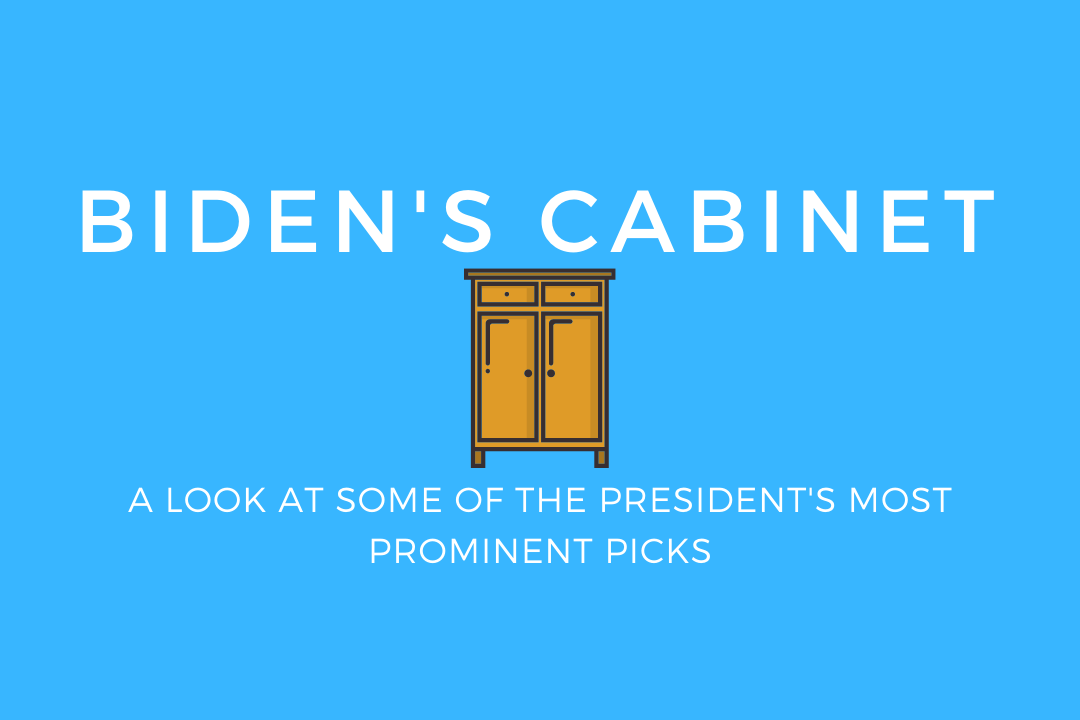 As Joe Biden assumes the presidency, we will start hearing news about the confirmation hearings for his Cabinet. The President’s Cabinet is made up of secretaries, advisors and experts that he deems fit to help advise and guide him in making decisions for our nation. Biden ran on a platform of expanded inclusion and equity and said it would be reflected in his new cabinet. Let's take a look at some of his nominee’s making history.

Kamala D. Harris, now the 49th vice president of the United States. The former senator from California is a notable pick for many reasons. Harris openly campaigned against him in the presidential primaries. She is the first African American, South-Asian American and woman vice president in the office’s 232 year history. While not the first woman VP candidate, she is the first to be elected to national office by more votes than anyone in history. There have been several other women candidates for a major office including Hillary Clinton (2016), Sarah Palin (2008) and Geraldine Ferraro (1984).

Many people probably don’t know many secretaries of the Treasury Department beyond Alexander Hamilton, thanks to the Broadway musical Hamilton, written by Lin Manuel Miranda. Dr. Janet Yellen would again be the first woman to be secretary of the Treasury. She has formerly served as chair of the council of Economic Affairs and chair of the Federal Reserve.

Secretary of the Interior - Deb Haaland

Deb Haaland is the former member of the House of Representatives from New Mexico. Before that, she was chair of the New Mexico Democratic Party. Haaland is an enrolled member of the Laguna Pueblo. The Pueblo people have seen the land currently known as New Mexico as their traditional land since at least the 1200s. Haaland was one of the two first indigenous women elected to the United States Congress in 2018, along with Sharice Davids of Kansas, a member of the Ho-Chunk Nation. Haaland would be the first Indigenous woman to lead the Department of the Interior, and the first Indigenous person to ever serve as a presidential Cabinet secretary.

Colloquially referred to as “Mayor Pete," Pete Buttigieg came to national recognition as the former Mayor of South Bend, Indiana who became a major candidate for the Democratic Party's 2020 presidential candidate. Buttigieg is a veteran of the United States Navy serving from 2009-2017. Buttigieg would make history as the first openly-gay Cabinet secretary to be confirmed by the U.S. Senate. Pete is married to Chasten Buttigieg, his partner of more than five years.

General Austin would be the first Black person to run the Pentagon, the seat of the Department of Defense. General Austin has served as the former commander of the US Central Command and vice chief of staff of the Army. General Austin would need a congressional waiver to be confirmed for this civilian position because federal law mandates there must be seven years of retirement from active duty before taking on the role, however General Austin retired only four years ago.

Xavier Becerra, the former attorney general of California (succeeding then senator and now Vice President Kamala Harris) would be the first Latino person to lead the department. Becerra served 12 terms in the US House of Representatives, holding several leadership roles before becoming California’s 33rd AG.

Avril Haines was President Biden’s first cabinet confirmation, and is the first woman to serve as director of national intelligence (DNI). She has served as principal deputy national security advisor to President Obama and chaired the National Security Council Deputies Committee. Haines has also served as the deputy director of the CIA.

Mayorkas will be the first Latino and immigrant secretary of the Department of Homeland Security. During the Obama Administration, he served as director of citizenship and immigration services for DHS. Mayorkas oversaw the implementation of the DACA program, an executive action under Obama protecting young undocumented immigrants who came to the US as children from deportation.

Marcia Fudge has represented Ohio’s 11th Congressional District since 2008 and has previously chaired the congressional Black Caucus. Before becoming a member of the U.S. House of Representatives, Fudge was the first woman and first African American to be elected mayor of Warrensville Heights, Ohio. Fudge will be the first Black woman to run the department in more than 40 years.

Regan will be the first African American man to lead the EPA. Regan previously served as North Carolina’s secretary for the Department of Environmental Quality. The agency's goal was to protect the state's environment and natural resources. Prior to that appointment, Regan led the Environmental Defense Fund’s effort to combat the climate crisis. He has worked at the EPA during both the Bush and Clinton Administrations.

Chair of the Council of Economic Advisers - Cecilia Rouse

Rouse will be the first woman of color to chair the Council of Economic Advisers. She has served as dean of the Princeton School of Public and International affairs, and was a professor of economics and public affairs at Princeton University. She has served in economic advising roles for both the Clinton and Obama Administrations.

Tai will be the first woman of color to serve as US Trade Representative. Tai is seen as an expert on China trade policy and oversaw trade enforcement for China during the Obama Administration. She has been a top trade counsel for the House Ways and Means Committee and played a key role in negotiating trade policy in the United States-Mexico-Canada Agreement, which replaced the North American Free Trade Agreement.

In total, the Biden Cabinet will be comprised of 25 experts, representatives, secretaries and officials. To learn more about the Presidential Cabinet, visit whitehouse.gov

*At the time of publishing this article, only two Cabinet members have been confirmed by the U.S. Senate: Director of National Intelligence Avril Haines and Secretary of Defense Lloyd Austin.